WHAT IS A MASCULINE QUARTZ CRYSTAL 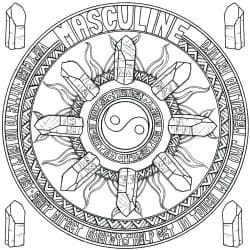 As with our discussion of Feminine crystals, we’re talking about what a Masculine quartz crystal looks like.

In the past I have called this an “anatomy lesson” because basically we’ll be discussing whether a crystal presents physically as Masculine.

(In the next post we’ll revisit Yin/Yang quartz crystals.)

DESCRIPTIONS of MASCULINE, FEMININE or YIN/YANG

It is pretty short and sweet to describe the LOOK of a Masculine crystal. I will also cover the energetic possibilities at the bottom of the post.

Remember, just as with humans, simply because a crystal presents a certain way (masculine or feminine) in appearance, it absolutely DOES NOT mean that it will also absolutely be energetically feminine or masculine.

We’ll start with the physical description of MASCULINE crystals:

Very clear points are called Masculine. They may be optically clear, or they may have some Fairy Frost. As a reminder, Fairy Frost is the wispy inclusions inside a crystal.

The base of a Masculine crystal may be dense with frost. However if more of the point is clear than cloudy, it is Masculine. But as I mentioned above, remember not to have preconceived notions, energetically speaking.

Just because a point is Masculine by description doesn’t automatically mean it can only present masculine energy. The same is also true for Feminine crystals.

Very clear crystals are often described as “water clear”. Here is a picture with some examples of Masculine quartz crystal which is water clear. Notice how very little Fairy Frost is present, just a few wisps here and there (the crystal in the far left has a Phantom):

You will find that most crystals are part Feminine and part Masculine. They may be a little bit more of one than the other, but not fully either. Crystal which is a little of both is “mostly Feminine” or “mostly Masculine”. Here’s an example of that: 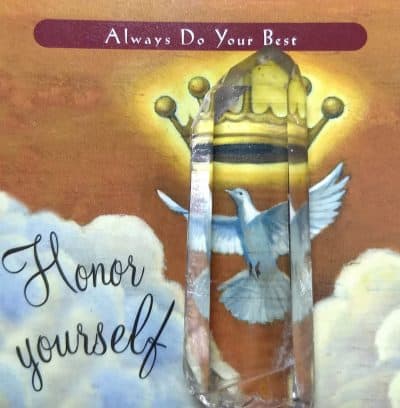 Whether or not a crystal presents as Feminine, Masculine or Yin/Yang physically, energetically speaking, here is what you might expect from an energetically Masculine crystal:

Masculine quartz crystal has a sharp and direct energy, and is helpful when you need to get to the point.

Yang in nature, Masculine quartz crystal is more action-oriented and the energy projects rather than recedes.

The energy of Masculine quartz crystal is more focused and linear.

When compared to a light, Masculine quartz crystal energy would be a high power flashlight or even a laser pointer (directed out the end in a focused beam).

DO YOU HAVE A PREFERENCE?

Many people prefer either primarily Masculine, Feminine or even Yin/Yang crystals.

You may have a preference that you weren’t aware of. You may tend to gravitate naturally toward one or the other.

I personally am more drawn to the look of Masculine crystals and the feel of Feminine crystals! Do you find that you have a preference or that your preference has changed over the years? I’d love to hear about it in the comments!

Here is a list of the Masculine quartz crystal currently available.