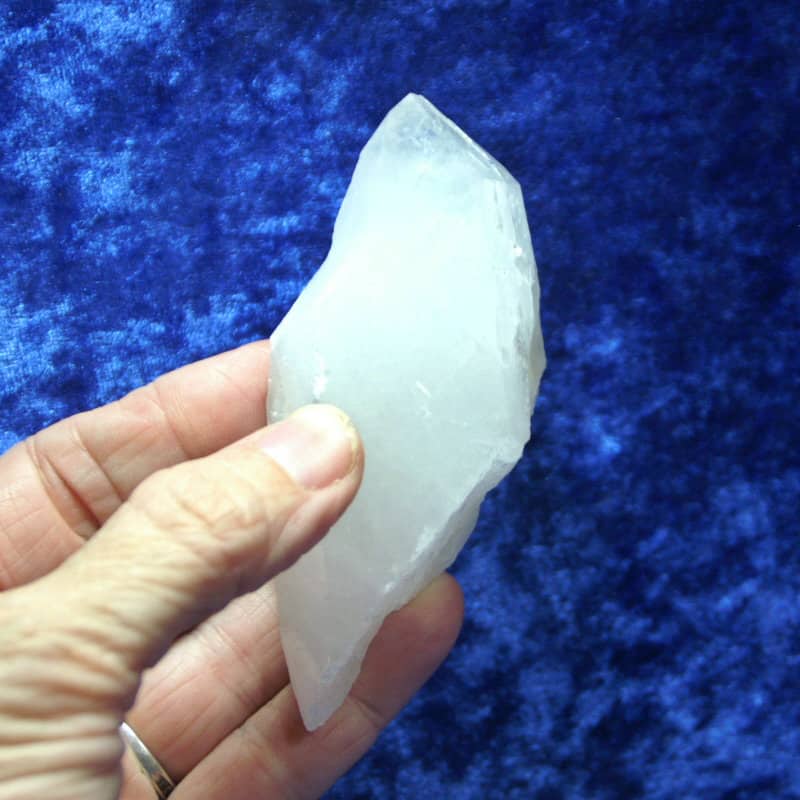 This is a Feminine Arkansas quartz crystal point, dense with Fairy Frost. The backside is missing due to an Imprint and large Key. There are some sharp areas where there are crystal projections and it has Lineated Sides.

FEMININE - Feminine crystals are dense and milky. The concentration of density in a Feminine crystal varies from nearly opaque fairy frost to solid white, milky quartz. Sometimes a crystal with some clarity (which typically is described as masculine) will still emit a feminine energy. Feminine crystals help us (both men and women) to get in touch with our feminine nature. They have a soft, yet deep, mysterious energy. Yin in nature, Feminine crystals are intuitive, nurturing and receptive.

IMPRINT - Imprints are indentations or marks left on the sides or faces of a crystal where they grew in close proximity to another crystal. Crystals with Imprints show how something is affected by outside influences. The original structure adapts to its environment as outside influences change its shape or form. This allows for growth and change, while still maintaining its basic inherent truth and beauty. An Imprint is a type of Key, so the characteristics of Key crystals applies as well.

KEY - Keys are indentations left by another crystal. Key crystals help you unlock answers to questions you may have. They help you to access anything which you   previously were blocked from accessing before you found the key. Is there an area which you could use help in accessing an answer which has previously been blocked to you? The energy of a Key crystal can help you to find an easier, more direct way in. Imagine this as easily opening the lock on the front door and walking right in (rather than having to check all the windows for one that is unlocked, climbing through, scraping your elbows and knocking your head). Ease of access is what Key crystal energy brings us. I like to put my finger in the Key as I work with the crystal. Meditate on the issue for which you need opening while holding the crystal in this way.

LINEATED SIDES - Lineated Sides are horizontal striations across the sides of a point. Lineated Sides can be used like a zipper to access further knowledge within the crystal. If you have worked with your crystal for a while and feel ready for more information or feel a desire to go deeper, you can unzip the crystal to receive the next layer of information. I experience this as receiving a deeper knowing or understanding that seems to be released quietly after they are unzipped. If you drag your thumbnail down the side of a point with deep striations, you are “unzipping” the crystal. To zip it back up, drag your thumb from the base back to the tip. This is like hanging up the phone after a conversation. It lets the crystal know you are “done for now” and you can pick up where you left off later. I used to think that unzipping would be like opening a box and looking inside, revealing a few more items, and once you see them, that is all. It isn’t quite like this though. It is more like opening the box, looking down inside and seeing that the bottom of the box opens to infinite space. There is no end to the amount of “extra” you can receive as you work with and unzip your crystal. It is literally like peeling an onion that has infinite layers. Just remember when you finish with your session to thank the crystal for its help, and zip back up until next time.

Be the first to write a review.
Submitting Your Review, Please Wait
Review Submitted

You must include a title, rating, and message in your review.
Your Review Title
Your Rating
Your Review