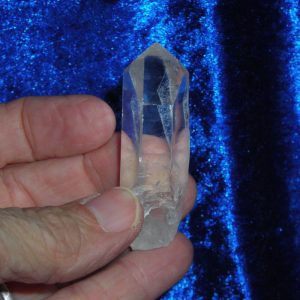 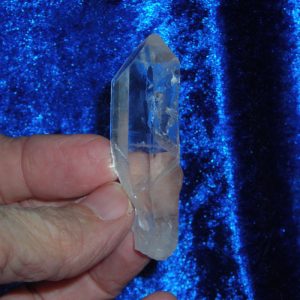 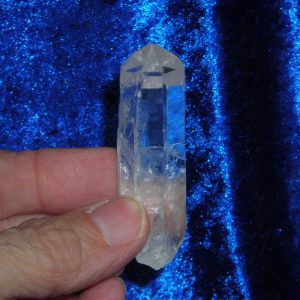 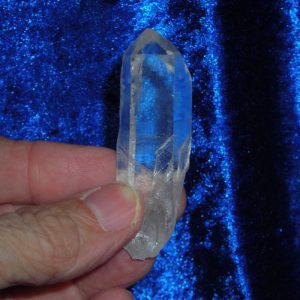 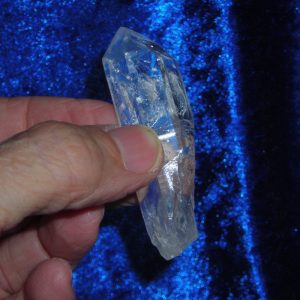 This Arkansas quartz crystal point is water clear (Masculine) with some wispy Fairy Frost and Mirror Fractures. It has Imprints and Keys, Lineated Faces with Sigils.

MASCULINE - Very clear points are described as Masculine. They are helpful when you need to get to the point. The energy they have is sharp and direct. Yang in nature, Masculine crystals are action-oriented and the energy projects rather than recedes. The term Masculine is referring to the physical characteristic of a crystal being very clear and typically refers to the energetic qualities (masculine, referring to energy, not masculine, referring to gender.) Just like with humans, however, many Masculine crystals do have masculine energy (referring to gender), but some have feminine energy. This is especially true when a clear (Masculine) crystal has an Isis Face. Just as with humans, it is important not to make assumptions based on the physical characteristic of a crystal. CLICK HERE TO SEE AVAILABLE MASCULINE CRYSTALS

FAIRY FROST - Fairy Frost is found inside a crystal (not like “frost on a pumpkin”). Fairy Frost is fractures and inclusions of air within the crystal. The trapped air is wispy, white and fairy-looking. Crystals with Fairy Frost are sometimes called Devic crystals. Devic Temple crystals have a combination of Mirror Fractures, Rainbows and Fairy Frost. Lots of crystals have Fairy Frost. Some are more fairy-like than others. Crystals with Fairy Frost are able to connect you with Nature Spirits and Fairies (Deva). They encourage us to connect with nature and to care for Mother Earth. CLICK HERE TO SEE AVAILABLE CRYSTALS with FAIRY FROST

KEY - Keys are indentations left by another crystal. Key crystals help you unlock answers to questions you may have. They help you to access anything which you previously were blocked from accessing before you found the key. Is there an area which you could use help in accessing an answer which has previously been blocked to you? The energy of a Key crystal can help you to find an easier, more direct way in. Imagine this as easily opening the lock on the front door and walking right in (rather than having to check all the windows for one that is unlocked, climbing through, scraping your elbows and knocking your head). Ease of access is what Key crystal energy brings us. I like to put my finger in the Key as I work with the crystal. Meditate on the issue for which you need opening while holding the crystal in this way. CLICK HERE TO SEE AVAILABLE KEY CRYSTALS

LINEATED FACE - Lineated Face crystals are crystals with surface markings viewed in the same way you find Record Keepers. Lineated face crystals may have markings which start as a small triangle that is outlined continually, oftentimes the pattern runs off the face of the crystal, sometimes it doesn’t. To picture this, just imagine the lines in a Zen Garden. The innermost triangle may or may not be centrally located. Lineated Face crystals may be accessed during meditation in the same way that you might use a labyrinth. To work with Lineated Face crystals, follow the lines in and down to a meditative state and when you are finished, work your way back out from the center. CLICK HERE TO SEE AVAILABLE LINEATED FACE CRYSTALS

SIGILS - Sigils are any markings that represent an idea. For example, a dollar sign is a sigil that represents money and abundance. Crystals may have markings that resemble things such as snake skin, mountain ranges, water or even cities. There are some that look like stacked skyscrapers, and recently I found an online image of sea cliffs in Iceland that are very similar to these sky-scraper-looking Sigils (Reynisfjara beach : South Iceland). Sigils are surface features; you view them the same way you view a Record Keeper. Because a Sigil is a marking that reminds us of an idea or invokes a memory or feeling, the meaning will depend on what the sigil represents to you. When you see Sigils and images, a good thing to do is let your mind’s eye wander through them and see if they take on a life of their own (like a video in your mind’s eye). This is a form of scrying and a way to receive the messages that the crystal is bringing to you through the Sigils. CLICK HERE TO SEE AVAILABLE CRYSTALS with SIGILS