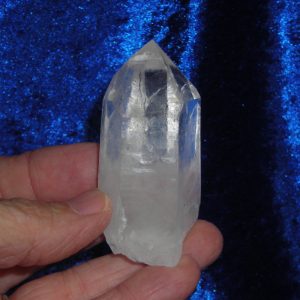 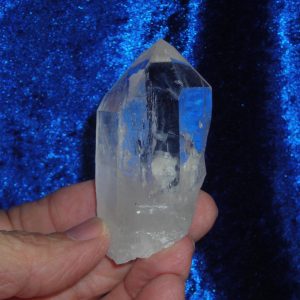 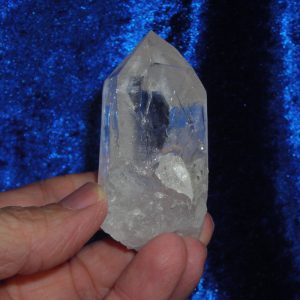 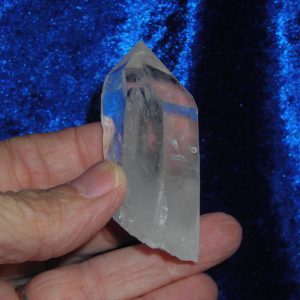 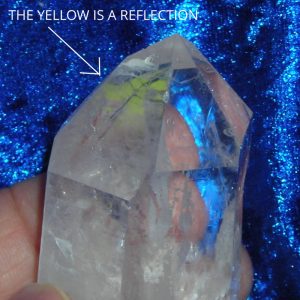 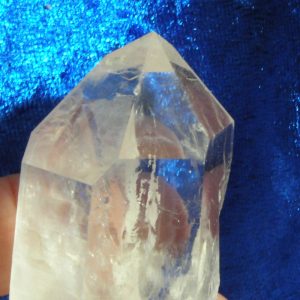 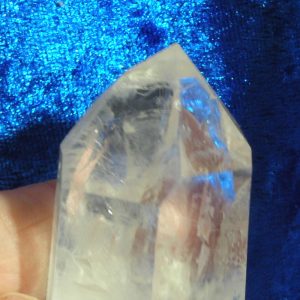 This Arkansas quartz crystal point is a Masculine (water clear) Gas Phantom with Mirror Fractures and Fairy Frost. It is Self-Healing with Lineated Sides.

GAS PHANTOM - There is a lot of controversy as to what creates these beautiful Gas Phantom crystals. When I was first introduced to them, I was told they were called "Titanium" Gas Phantoms. The mine where they were found in Arkansas is now closed, and, as far as I know, they don’t plan to re-open it. The faces of Gas Phantoms have a sort of gaseous-looking spray that looks like spreading fingers from bottom to top (base of triangle to tip). The really good examples have the spray marking as well as alternating clarity on every other face: one with a light, blue-grey haze (sometimes with a spray), the next clear, one with haze, one clear, etc. They usually have heavy etching on the faces, but not always. The spray looks like a bluish-grey to white haze or smoke just under the surface and the sides tend to have this internal smoky haze as well. Gas Phantoms are excellent crystals for Lightworkers and those working with the emerging earth energies. I can’t say enough how much I love these crystals! While they feel very powerful, their energy is buttery smooth and they physically have a soft feel as well.

LINEATED SIDES - Lineated Sides are horizontal striations across the sides of a point, to be used like a zipper to access further knowledge within the crystal. When you have worked with your crystal and feel ready for more information (desire to go deeper), unzip the crystal to receive the next layer of information. Drag your thumbnail down the side of a point to ‘unzip’ and to zip it back up, drag your thumb from the base back to the tip. Unzipping is like opening a box, looking down inside and seeing that the bottom of the box opens to infinite space. There is no end to the amount of ‘extra’ you can receive as you work with and unzip your crystal. Rezipping is like hanging up the phone. It lets the crystal know you are ‘done for now’ and you can pick up where you left off later. Remember after your session to thank the crystal for its help, and zip back up until next time.