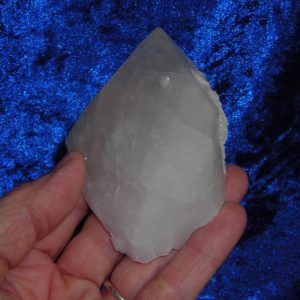 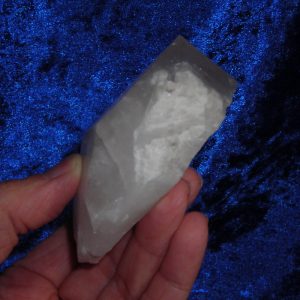 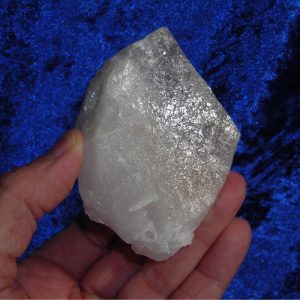 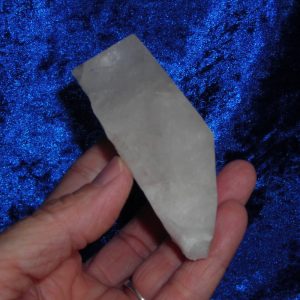 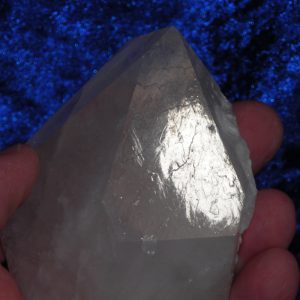 This Arkansas quartz crystal point is Empathic (missing the back half) but Self Healed. It has Etching and Sigils on the faces, faint Record Keepers, is mostly Feminine (cloudy or milky) with a small Left Activation Window (Time Link to the Past) and Lineated Sides.

RECORD KEEPER - Record Keepers are crystals that have triangular markings on the faces. They seem to be three-dimensional, but they usually can’t be felt with your finger. You have to hold a crystal at just the right angle in order to see the Record Keeper. Usually they are very sharply edged, equilateral triangles; however, I have seen them with rounded bottoms as well (more arrowhead shaped), which I call non-traditional. There may only be one present on a face, or you may find layers and layers of them. Record Keepers will appear and disappear (I call that ‘popping’). A Record Keeper crystal will find its way to the person who needs the information it contains and they help you access special wisdom and information specific to you. In a way, they represent storage devices but the information is accessed via a portal. The portal is the Record Keeper marking.

LEFT ACTIVATION WINDOW/TIME LINK TO THE PAST - A Left Activation Window is an extra facet that leans to the left. It looks like a parallelogram leaning left. They may be sliver-thin or thick. It may remind you of a back slash on a computer keyboard. Left Activation Windows are Time Links to the past. They also activate left-brain functions (such as logical thinking and analysis). If you are inclined to be more in one ‘brain’ or the other, it is good to use the crystal of the hemisphere you tend not to use as much. Once you have reached a balance, you should use a Left and a Right Activation crystal together to maintain that balance.