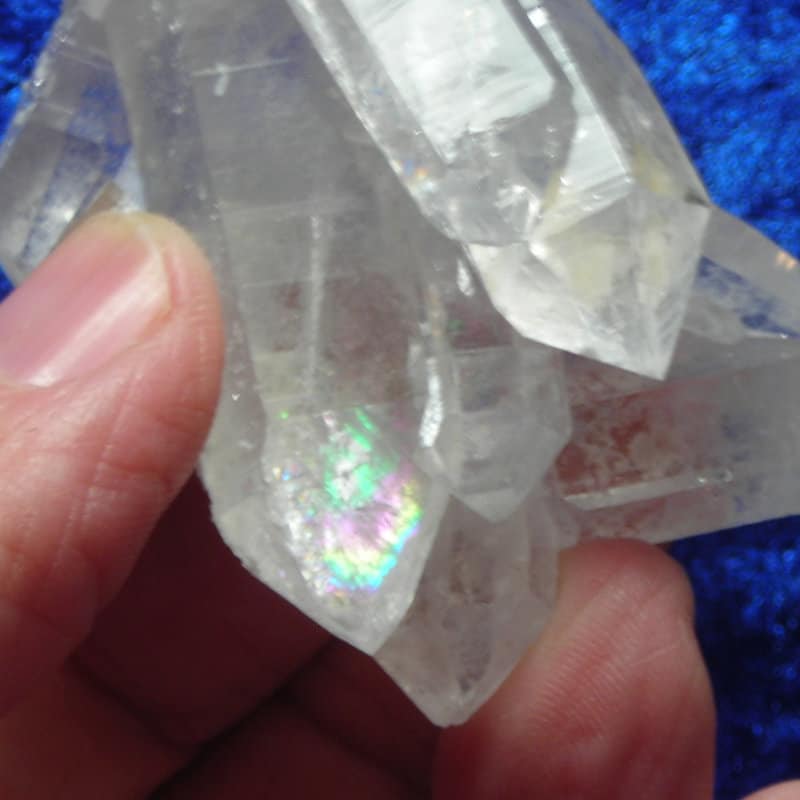 Arkansas quartz crystal point/cluster, Double Terminated, Bridges, Barnacles, Drusy, Inclusions of white/milky quartz and Rainbow. So beautiful and delicate and so much to see!

DOUBLE TERMINATED - Double Terminated crystals have a termination on both ends. These crystals grow from a ‘seed’ molecule of silicon dioxide in clay and grow outward in both directions. They are not formed on a matrix. The energy in these crystals flows in both directions as well. Even though they have two terminations, oftentimes there is usually one end that feels like the ‘top’ and one that feels like the ‘bottom’. Double Terminated points promote psychic ability and dream recall (because they send as well as receive) and are also used for balance. They are useful in any application in which you want the energy to flow in both directions. Because the energy flows in both directions I like using them in healing layouts or grids.

BRIDGE - A Bridge is a smaller crystal (or crystals) penetrating and located partially in and partially out of a larger crystal. Bridge Crystals help to bridge between worlds. This may be the inner and outer worlds between your inner and outer Selves or between yourself and others in the physical environment in which you now live. They are helpful in any area you might imagine needing a bridge. They can help you heal and get in touch with your inner child (bridging the gap between your outer self and your inner self). They are also good for connection and perspective, bring you up out of the muck, giving you a birds-eye view of a situation. While providing connection, they also help provide boundaries. Also called Inner Child.

INCLUDED - Included crystals occur when crystal is forming, and there may be other substances present in the solution. These substances might be air bubbles or other minerals. They become trapped (or Included) within the crystal point during its growth and are called Inclusions or Included crystals. Air and moisture inclusions fall into the category of Fairy Frost, a non-mineral inclusion. The properties of Included crystals will vary, depending on the mineral included within the crystal. The properties of the included mineral will be enhanced and amplified by being trapped within the structure of quartz.